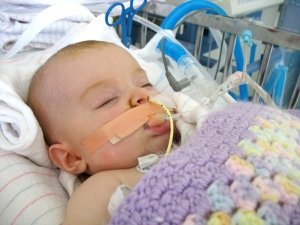 Botulism is an illness that can happen when a person’s body ingest toxins from a bacteria called Clostridium botulinum. It is an illness that poses serious threats, especially among young babies, as those who have contracted the disease may not recover fully.

The condition can be frightening because it can cause muscle weakness and breathing problems.

The three common forms of botulism are:

Infant botulism is treatable, but because of its severity, it’s important to learn the symptoms so you can recognize it early. Also know that honey is a known source of the bacteria spores that cause botulism. For this reason, honey shouldn’t be given to babies younger than 1 year old.

This illness usually affects babies who are between 3 weeks and 6 months old, but all babies are at risk for it until their first birthdays.

If infant botulism is related to food, such as honey, problems generally begin within 18 to 36 hours after the toxin enters the baby’s body.

Signs and symptoms include:

Spores of Clostridium botulinum bacteria, found in dirt and dust, can contaminate honey. These bacteria are harmless to older kids and adults because their mature digestive systems can move the spores through the body before they cause any harm.

But very young babies haven’t developed the ability to handle the spores yet. So if an infant ingests them, the bacteria germinate, multiply, and produce a toxin. That toxin interferes with the normal interaction between the muscles and nerves and can hamper an infant’s ability to move, eat, and breathe.

Symptoms of botulism begin between 3 to 30 days after an infant ingests the spores. Constipation is often the first sign of botulism that parents notice (although there are many other causes of constipation). Call your doctor if your baby hasn’t had a bowel movement in 3 days.

Other symptoms of Botulism can include:

Infant botulism can be treated, but it’s important to get medical care as soon as possible. Call your doctor right away and seek medical attention if you see any of the warning signs in your baby.

Infant botulism is treated in the hospital, usually in the intensive care unit (ICU), where doctors will try to limit the problems the toxin causes in the baby’s body. The toxin can affect the breathing muscles, so doctors may put the infant on a ventilator. Because the toxin can affect the swallowing muscles, they may give the baby intravenous (IV) fluids or feedings through a tube to provide nourishment.

An antitoxin is now available for the treatment of infant botulism, called botulism immune globulin intravenous (BIGIV), which should be given as soon as possible. Babies with botulism who have received BIGIV recover sooner and spend less time in the hospital.

With early diagnosis and proper medical care, a baby should fully recover from the illness.

Like many germs, the Clostridium botulinum spores that cause botulism in infants are everywhere in the environment. They’re in dust and dirt, and even in the air. Experts don’t know why some infants contract botulism while others don’t.

One way to reduce the risk of botulism is to not give infants honey or any processed foods containing honey before their first birthday. Honey is a proven source of the bacteria and has led to botulism in infants who’ve ingested it. Light and dark corn syrups were thought to be a source of spores, but no proven cases of infant botulism have been linked to them. However, check with your doctor before giving these to your baby.

患上了手足口病，该如何护理？ How to Ease Your Child’s Feelings When He/She is diagnosed with HFMD?
Scroll to top

Due to high traffic our pages are a little slow. We ask for you patience while pages load. Thank you. Dismiss